Hosted by the world famous juggler and comic emcee Wally Eastwood, audiences will experience a rotating cast that include famous acts such as the death-defying skating routine of the Skating Aratas, the belly busting comedy of the Crazy Gauchos, the contortion skills of America’s Got Talent finalist Alonzo “TURF” Jones, the mind melting illusions of Melinda: The First Lady of Magic and many more. Even stick around after the show and meet some of your favorite performers in person! With a rotating cast of over 14 acts, audiences can guarantee no two shows will ever be the same.

When V Theater first opened back in 2004, V – The Ultimate Variety Show was the first production to take the stage in the newly founded venue. Now almost a decade later this production stands as the most critically acclaimed Las Vegas show around, with a history almost as big as its cast. So come and see for yourself why audiences are raving over V – The Ultimate Variety Show, and pick up your tickets to the best variety show in Las Vegas today!

Added to wishlistRemoved from wishlist 0 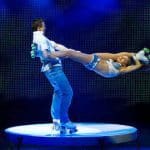 $40.00 -50%
Buy product
No Code Needed
Added to wishlistRemoved from wishlist 0 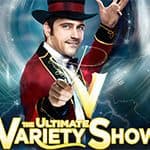 $40.00 -49%
Use this V - The Ultimate Variety Show promotion code and save 50% on VIP and General Admission ticket prices through the official box office.
★★★★★
Apply Coupon
Vegasdealhunter
SaveSavedRemoved 1