From the minds of magician Criss Angel and Frank Dragone, director of Cirque du Soleil's "O" and "Mystére, comes the fantastical prequel to MINDFREAK. This beautifully created story follows the life of Criss Angel, taking the audience through his struggles, his triumphs, and what inspired him to become one of the world's most well-known illusionists.  Perfect for anyone looking to see an unbelievable spectacle of the senses, including families with older kids. Children who are more sensitive...

25% Off Tickets!
Use this Criss Angel Amystika promotion code and save an additional 25% when ordering online through the official box office.
View Promo Code
View Promo Code
Added to wishlistRemoved from wishlist 1 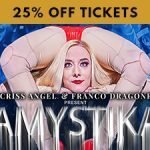 Compare prices from all of the major Las Vegas ticket brokers and find the best discount on Criss Angel Amystika Las Vegas.  If you don’t find the cheapest price you wish to pay for tickets, set the lowest price alert and be notified when the price drops to your desired price point.

Must be 5 years of age or older

From the creators of the biggest smash hit shows in Las Vegas: Mindfreak, “O,” and Mystère. Visionaries Criss Angel and Franco Dragone have “reimagined entertainment” in their latest “history-making” production, AMYSTIKA – a “five-star smash hit!” A beautiful, scary, fantastical, “revolutionary visual and immersive feast,” this theatrical experience will keep you on the edge of your seat amidst tornado winds, a blizzard of snow, and some of the most death-defying acts ever seen. These creative layers bring to life the inspirational story of how a boy named Christopher followed his dreams – through his nightmares – and persevered to become Criss Angel “the greatest magician of all time!” The story, narrated by the voice of Criss Angel, is one that everyone can relate to – the trials and tribulations of life and how a glimmer of light can see us through our darkest hour and make what appears to be impossible, possible! AMYSTIKA, “a theatrical phenomenon,” melds the most incredible visual effects and the world’s greatest artists: the jaw-dropping burning man, an unbelievable contortionist, stunning arial vignettes that defy gravity, and revolutionary magic and illusion performances.  Killing the audience every night with guaranteed laughs is the “hilarious” comedy magic of Mike Hammer – a Vegas headliner for over a decade!

Added to wishlistRemoved from wishlist 1