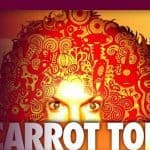 Compare prices from all of the major Las Vegas ticket brokers and find the best discount on Carrot Top Las Vegas at Luxor Hotel and Resort.  If you don’t find the cheapest price you wish to pay for tickets, set the lowest price alert and be notified when the price drops to your desired price point.

The award-winning comedy of Scott “Carrot Top” Thompson, also titled “Entertainer of the Year!” and “Comedian of the Year,” keeps his audience in stitches as he unpacks trunk loads of crazy props and wacky inventions.

Carrot Top’s successful and storied career has allowed him to develop a completely unique genre of comedy that is self-explained as a combination of George Carlin (for his “observational humor”), Steven Wright (for his “dark, sick humor”), and Gallagher (for his use of props). Utilizing that one-of-a-kind style, the resident show is ever-evolving and has become a Las Vegas staple, reflecting current headlines, consistently poking fun at pop culture, politics and music.